I was in Hanoi last month to participate in the APAC ambassadors meeting, as well as the Software Freedom Day event. This post summarizes notes from the trip.

On the first day, we had a meeting set up, to go through the current year’s budget, and discuss concerns with our respective countries. Tuan, Thang, Alick, Somvannda and yours truly were physically present. Gnokii, Kushal and Ankur participated for significant portions of time, remotely over IRC.

We started with a general discussion about the APAC situation. Some (not sic) moments:

We have a lack of physical meetups among APAC folks.

Tuan was my roomate in Prague (at Flock), and we had a brief discussion about this. For most APAC meetings, at least until a few weeks ago, there would be very few representatives from Asian countries. When the budget was to be made for the current FY, Tuan announced over the mailing lists, but nobody showed up.

We discussed how this situation is improving. In November this year, a FAD is planned where folks have been invited to help with the budget planning. The recent meetings have run over an hour and we regularly have irregular meetings these days ;) While that is indeed trouble, it indicates interest, which is a good thing.

We should stop people from treating Fedora as a travel agency.

For context, here’s a blogpost around the same concern. Many Indians just want to become ambassadors, because they think that warrants them funds to travel. It’s of course great if people have been contributing in volumes and want funds to travel and speak about it - in fact, that’s encouraged. But in the recent times, Kushal says he receives mentorship requests, where the person doesn’t want to go through the mentoring process and wants to gain ambassador status directly. Kushal quoted examples and how the mentors team in India dealt with it. 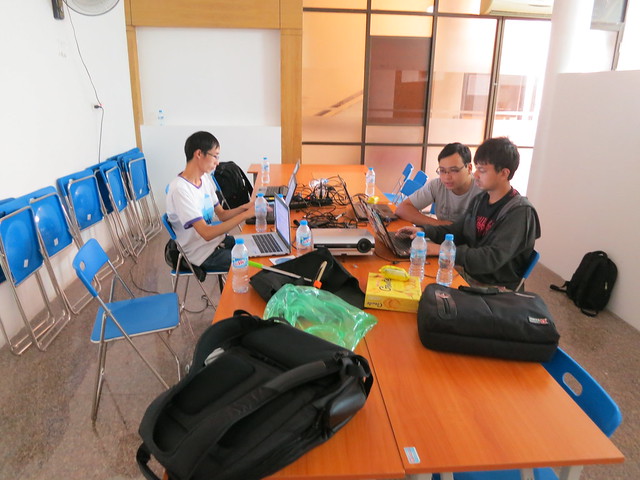 Us hard at work Photo: Somvannda

Next, we worked on the most important bit: the budget. Alick volunteered to review and update Q2 and I helped with Q1. Alick got lucky since most events planned in Q2 were cancelled and there wasn’t much to review. Thang helped me cross-check events, swag requests and travel tickets from Q1.

After a lunch break, we turned to discuss Ambassador Polos and FAD Phnom Penh. I had been working on cleaning up the entire APAC trac for two weeks, but was unable to complete it because people hardly respond. Finally, at the meeting, with help from everyone present, the APAC trac is now Sparkly!

Software Freedom Day at the Uni

This was my second SFD, first being the one I helped organize in school. The way this one was organized was definitely more colorful - it started off with a Tux dance!

Alick had some swag flown over from China, so we used them up at our booth - it disappeared quickly, even before we had a chance to grab some of the folks and do some Fedora preaching. Nonetheless, it was super fun. I think we managed to direct some of the students to our Fedora room for the afternoon sessions. With the swag all gone and not much agenda for the rest of the morning, we headed to the main hall. 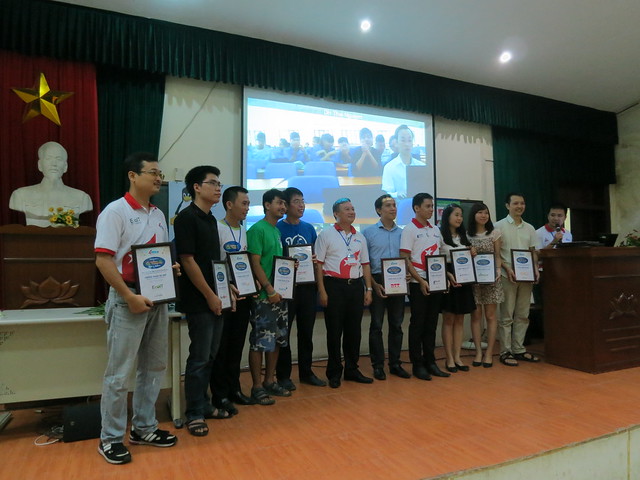 I’m going to have to quote the following line from Alick’s report:

Sarup, Somvannda, and I are honored to be introduced as special international guests to the event (in English).

It was funny (although exciting) to attend the first few talks in the regional language. Well, we even attended the “How to contribute to Fedora without programming skills” keynote by Tuan in Vietnamese ;)

Come afternoon, we moved to our Fedora room. While Trang and I went around gathering folks to attend our sessions, Thang introduced the attendees to the Fedora Project - who we are, what we do, our goals, and why bother. He did his session in Vietnamese, and the attendees were visibly glued.

Next was Alick’s session on FOSS Software Defined Radio. I think he did a great job introducing the topic - it was a topic unfamiliar to me, but now I get the basics. I liked his idea of motivating through examples.

Finally, I did my mini workshop on FOSS 101. Prior to the event, we had a little debate around what I should talk about - GSoC? Git? Rails? From my understanding of the audience, I decided to do a diluted version of my FOSSASIA workshop. I introduced attendees to the idea of FOSS, put up quotes sent to me by Sumanah and Tatica (who I’ve always felt are great examples of our awesome lady FOSS activists) and showed them around IRC & the idea of mailing lists. I wrapped up with a basic introduction to Git (for which I should thank Alick for his help with the demos and Trang for the translation).

Day 0 was 18 September 2014. I was put up at the Hanoi Legacy Hotel near the Hoan Kiem lake. My roomate was Alick, who arrived later in the evening. Somvannda was at the hotel a day in prior. Tuan and Thang being the locals, were our awesome hosts. For dinner on all but the last day, we had street food near the hotel. On the last day, we had dinner with the VFOSSA folks, other organizers and volunteers.

As you would guess, we had fun along the way! On Day 0, Somvannda and I went around Hanoi’s streets hunting for Egg Coffee.

For dinner, Tuan and Thang took the rest of us to a nearby food joint, where we tried out some rather interesting Vietnamese food. I (kinda) picked up how to use a chopstick too.

On Day 1, after the meeting was over, we headed to the Water Puppet Theater - a unique concept. For dinner, we roamed the street for local food, followed by a brief trip to the Night Market in the Hanoi Old Quarter. I wish we could have revisited the place on the final day as well, but we couldn’t as the events ended late.

On the final day, we were joined by the awesome (hopefully significant future contributors) Trang and Phuong. Trang made us try “Corn in Fish Sauce” and we wrapped up with the usual beer :-)

It was definitely a weekend well spent and I’d like to thank everyone for the fun and productive time!